The types of employment practices liability (EPL) losses that occur due to marijuana use trend differently from typical EPL losses, with wrongful termination accounting for the highest percentage of losses.

The use of medicinal and recreational marijuana has become more prevalent in the U.S. with the passage of laws in many states. This has created uncertainty for employers, especially when balancing an employee’s rights with workplace safety. EPL losses typically include cases in which a company fired an employee for a positive drug test, even if the employee was using marijuana off duty or for approved medical purposes.

Losses resulting from unfair hiring practices are also more common with marijuana-related EPL cases than with employment losses in general, according to Advisen loss data. 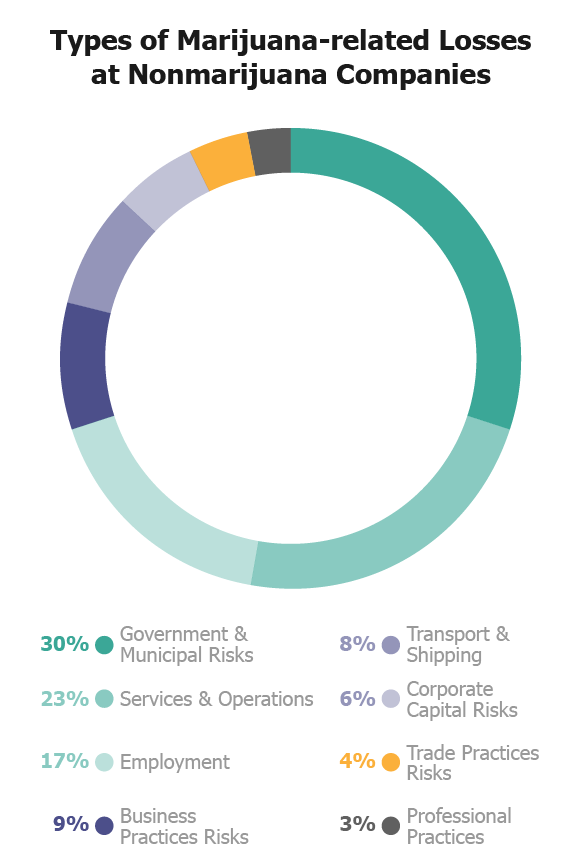 Historically, courts have sided with employers in cases of wrongful termination or workplace discrimination related to marijuana use. However, a few recent cases have gone against this precedent.

For example, in September, the Pennsylvania Superior Court held that the state’s Medical Marijuana Act (MMA) allows an employee to sue their employer for adverse actions taken as the result of their status as a medical marijuana user. In Arizona, a Walmart employee who used medical marijuana was fired for failing a drug test. In this case, the district court determined Walmart acted in violation of the Arizona MMA and wrongfully terminated the employee. The court did uphold that an employee could still be fired for using marijuana on the premises or during work hours.

Certain employers may be more insulated from this type of litigation than others. For example, there may be a legitimate basis for banning medical marijuana use among commercial drivers and law enforcement personnel.

The partial legalization of marijuana has created a complex risk environment for HR departments and risk managers of all industries. Employers can get ahead of the issue by reviewing workplace policies, updating them as necessary and communicating the changes to employees.