Worker classification has a direct impact on employee eligibility for benefits, legal protections (such as minimum wage and overtime rights) and taxation. Employee misclassification is a growing concern for the U.S. Department of Labor (DOL). On July 15, 2015, the DOL issued an administrative interpretation to clarify how to determine whether a worker is an employee or an independent contractor.

Several tests exist to determine whether a worker is an employee or an independent contractor. The most common tests include the common law or agency test, the economic realities test, the hybrid test, and the IRS test.

The DOL has favored using the six-factor economic realities test, which looks at whether a worker is economically dependent on the employer or in business for him- or herself. According to the DOL, if the worker is economically dependent on the employer, the worker is an employee and should be protected by employment laws, including the Fair Labor Standards Act (FLSA) and the Family and Medical Leave Act (FMLA). 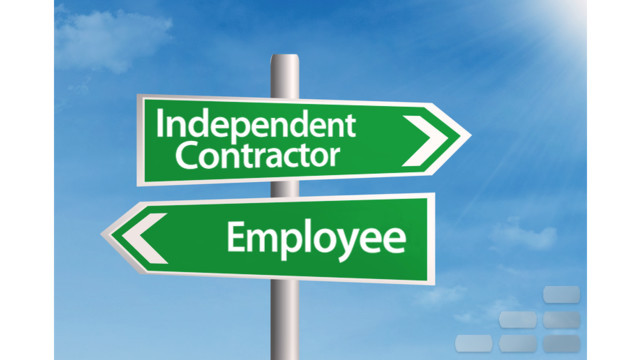 The six factors for the economic realities test are:

In the administrative interpretation, the DOL emphasized repeatedly that no one factor is determinative and that the factors should not be applied in a mechanical fashion. Rather, the DOL encourages employers to use the six factors as a guide in their efforts to classify workers correctly.

The DOL further explains that the six factors should be interpreted within the context of the FLSA’s definition of employment. The FLSA defines “to employ” as to “suffer or permit” someone to work. The DOL explains that this broad definition of employment was “specifically designed to ensure as broad of a scope of statutory coverage as possible.” This “suffer or permit” standard prevents employers from using agents to evade labor and employment responsibilities. According to the DOL, under the economic realities test, most workers will be considered employees covered by the FLSA.

An Integral Part of the Employer’s Business

A worker is more likely to be classified as an employee if he or she performs activities that are an integral part of the employer’s business. The “integral” factor is compelling even when the activity in question is just one component of the business or is performed by hundreds or thousands of other workers. For example, the DOL states, “a worker answering calls at a call center along with hundreds of others is performing work that is integral to the call center’s business, even if that work is the same as, and interchangeable with, many others’ work.”

Work can be integral to an employers’ business even if it is performed away from the employer’s premises, at the worker’s home or even on the premises of the employers’ customers.

When evaluating this factor, employers should consider a worker’s decision to hire other workers, purchase materials and equipment, advertise, rent space and manage timetables.

The DOL specifically mentions that a worker’s ability to work more hours and the amount of work available from the employer have “nothing to do with the worker’s managerial skills and do little to separate employees from independent contractors.” This is because both are likely to earn more if they work more and if there is more work available.

Finally, investing in tools and equipment is not an automatic indication of significant investment or that the worker is an independent contractor. This type of investment must be compared to the worker’s investment in his or her overall business and to the employer’s investment in the project and perhaps in its overall activities.

Employment that is permanent or indefinite in character suggests that the worker is an employee. Most independent contractors will avoid permanent or indefinite work relationships and are usually hired to work until a job or a project is complete (even if this takes several months or years). Moreover, once a job or project is complete, the independent contractor does not necessarily continue to provide his or her services to the employer.

Employers should consider a worker’s reasons for intermittent, seasonal, permanent or indefinite employment. Neither working for others nor having multiple sources of income transforms a worker into an independent contractor. The key is to determine “whether the lack of permanence or indefiniteness is due to operational characteristics intrinsic to the industry (such as employers that hire part-time workers or use staffing agencies) or the worker’s own business initiative.”

For seasonal employment, the proper test to determine permanency is whether the employees worked for the entire operative period of a particular season, not whether the worker returns from season to season.

Nature and Degree of Employer Control

An independent contractor controls meaningful aspects of the work he or she performs. This type of control should lead objective observers to conclude that the worker is conducting his or her own business.

Control over meaningful aspects of the work may extend beyond controlling working hours and could include work schedules, dress code and task prioritization.

Finally, the DOL warns that the control factor should not “play an oversized role” and dwarf other factors in the economic realities test when determining whether a worker is an employee or an independent contractor.